Amsterdam is a beautiful place to visit all year, but in December it is especially beautiful. With plenty of festivals, christmas markets, parties and plays, it’s hard not to enjoy yourself!

The Amsterdam Light Festival is a must-see event. 2019 marks its eighth edition. Every year several Dutch and international artists create light sculptures on the canals of Amsterdam. It’s a spectacular show and it’s popular among Dutch people and tourists. You can choose to watch the sculptures on foot or by bike, but the best way to enjoy them is by boat. You can book a tour at several tour operators who guide you through the canals. Enjoy a mulled wine or hot chocolate while you watch the beautiful light installations.

If you are visiting Amsterdam on New Year’s Eve, you should really celebrate the new year with the Dutch. You can of course stay in the hostel, but it’s nice to enjoy one of the many parties Amsterdam has to offer. There are plenty of pubs where you can celebrate, but many of them will sell tickets for the evening. The other option is to join a party in one of the Amsterdam clubs. Dutch tourism platform I Amsterdam provides a list of popular parties to attend on NYE. For example, you can go to Pllek, on the NDSM terrain. At Pllek you can enjoy a three-course dinner, followed by drinks and of course dancing to live music and watching the fireworks. What could be more festive?! 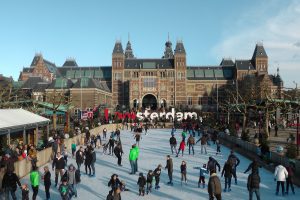 By now, we don’t think the canals will freeze this December, but there’s always hope! If not, you can go to one of the ice skating rinks around the city. Most skating rinks will offer hot beverages to warm up to on cold December days. Skating might be the most romantic date activity in Amsterdam!

In December there are a couple of matches you can watch of the Amsterdam football club Ajax. Three of them are in their home stadium the Johan Cruijf Arena. If you just want to visit the Johan Cruijf Arena, you can also take a tour around the stadium. During the tour you can see the changing rooms, the press room, the players tunnel and the managers dugout. Football might not be the most festive thing in December,  but it sure is fun!

Amsterdam’s Royal Theatre Carré is like any other theatre, but originally it was built to be a circus ring. Every December circus performers come to Carré to perform the most breathtaking choreographies in a beautiful Christmas show. The World Christmas Circus is only around from 19 December 2019 up to 5 January 2020, so enjoy it while it’s there.